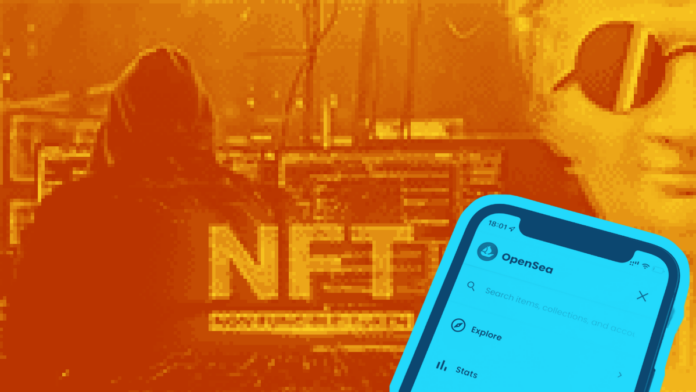 Popular NFT trading platform OpenSea has announced a policy change for stolen NFTs after receiving mixed reactions from users regarding the matter.

With NFT scams on the rise, Web3 platforms increasingly struggle with locating and managing stolen assets. As the leading NFT marketplace on Ethereum, OpenSea has recently received a lot of negative reactions from its users regarding the policies related to the above issue.

On August 10, the platform announced on its official Twitter a change to its policy on handling reported stolen NFTs. Previously, OpenSea blocked the purchase, sale or transfer of stolen assets on its platform and launched an investigation into the incident. This will prevent users from accessing the NFTs until the project makes an announcement. 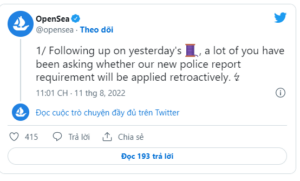 However, as OpenSea said recently, the platform will require a police report to be submitted within seven days of publishing a stolen NFT. The move is put in place to prevent false reports about digital assets. If the police report is not submitted in a timely manner, the detention of the NFTs will be lifted.

OpenSea is a trading platform for non-fungible tokens (NFTs) also known as NFT Marketplace. Launched since January 2018, OpenSea allows the participating community to create accounts to buy, sell and exchange NFT digital assets and operate this activity through smart contracts in blockchain technology.

In addition, OpenSea also said that the platform will simplify the request cancellation process after users recover their stolen NFT or if they want to withdraw the report.

On August 11, OpenSea clarified that the police reporting requirement would only apply to new claims filed against stolen NFTs.

“If we did this up front, we would ask them to take an additional step months or weeks later.” project emphasis.

In addition, OpenSea said that because the platform is based in the US, it is not possible to authorize the sale of NFTs marked as stolen. However, the project’s broad policy will apply to blacklisting reported content. This means that users who have purchased NFTs without knowing they were stolen will not be able to trade or transfer these assets.

“In some cases, buyers who accidentally purchased an item that was stolen (though through no fault of their own) were unwittingly penalized. This is one of the most difficult problems we face. Please believe that we are taking this matter seriously. And we’ve been actively listening to your feedback on how to address this.” OpenSea shared on Twitter.

However, many people argue that while OpenSea may block the ability to buy, sell or transfer some NFTs on the platform, it does not prevent users from trading elsewhere. Owned NFTs remain in the user’s own wallet, and they can use marketplaces that don’t have the same policy or don’t mark stolen NFTs.

OpenSea also emphasizes that it is working with other Web3 platforms to test and mitigate the impact of such NFT scams. It also aims to better educate users.