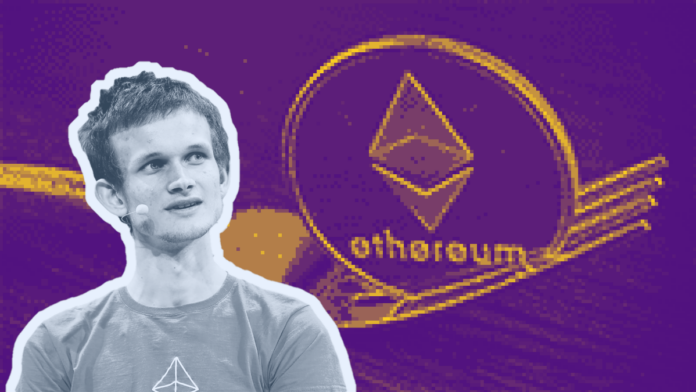 The approaching event of The Merge is also the time when the controversy about the Ethereum hard fork, or the Ethereum chain split, becomes the most intense. Recently, Vitalik offered some opinions on the fate of these chains.

The Merge is scheduled to take place in September 2022. This is the event that will help transform Ethereum’s consensus mechanism from proof-of-work to proof-of-stake. 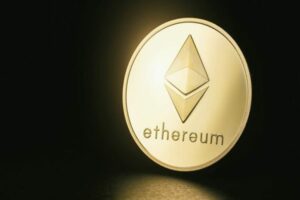 The Merge helps open up new avenues of development and enhances future scalability for Ethereum. However, because of the change of consensus mechanism, The Merge will replace miners with stakers. Since then, this upgrade has caused miners and their rigs to find an alternative to Ethereum.

While The Merge cannot be prevented, miners can “clone Ethereum” and create their own version of the network where the transition never takes place.
At the end of July, Chandler Guo – a well-known crypto investor and miner in China announced that he will fork the network to create “ETH POW”. 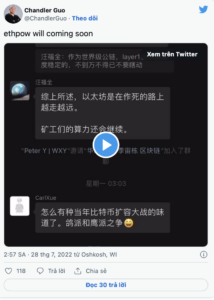 A survey was created by Galois Capital, a crypto investment fund to consult with the community on the possibility of Ethereum splitting after The Merge. 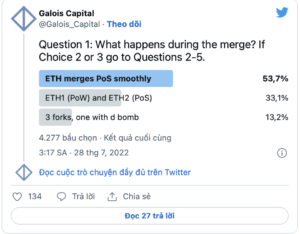 According to the survey results, although the majority still support that The Merge will go smoothly, more than 40% still think that the chain split event will take place later.

The majority of the community commented on Reddit that the ETHW or ETH1 chain would fail for a number of reasons such as: ETHPoW will not attract users, decentralized applications will collapse.

“There will be very few people who will use proof-of-work chains. They are not supported by many parties. In most Oracle applications, the system that provides real-time data will not update. NFT marketplaces will also ignore NFTs on the fork chain. The DeFi applications above will also collapse.” a Reddit account called “FaceDeer said.”

Recently, Chainlink, a leading project on Oracle, announced that it does not support the PoW ETH chain after The Merge. 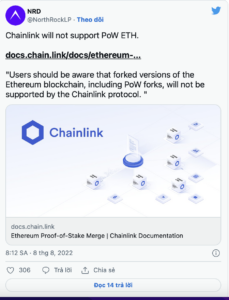 “Users should be careful that Ethereum fork versions, especially PoW forks, will not be supported by Chainlink,” Chainlink said in a statement on Twitter.

In addition to Oracle, Vitalik Buterin, the founder of Ethereum also mentioned stablecoins as a “vital” factor for Ethereum forked chains.

“By the time the merge happens, you will have two networks… Exchanges, Oracle service providers, and stablecoin providers will decide which network will succeed,” Vitalik shared. at the BUIDL Asia conference in Seoul.

In addition, there is still another problem that the forked chain faces, which is the possibility of this token being dumped after listing. This will drastically reduce the token price, thereby seriously affecting the cost of maintaining miners.

“If ETHPoW is listed on an exchange, it will be dumped immediately. That leads to a cost problem. Miners will not waste their hardware and energy when the new network is not used by many people. It would be better if they use them to mine ETC.”, a Reddit user named “Enigma735” said.

Similar to stablecoins, when a hard fork event occurs, assets on the old chain will be copied to the new chain in the same amount. Thus, assuming that after the merge will create two chains of ETHW and ETHS, the user will have two tokens with twice the amount of Ethereum in the old chain. From there, the chain’s tokens that are not trusted by many users will easily be sold off by investors.

The same thing happened in 2016, when Ethereum Classic was the blockchain forked from Ethereum after the hard fork. Vitalik sold off ETC after receiving a lot of these tokens from the hardfork.

Even so, many exchanges still announce that they will support listing tokens of this proof-of-work chain.

On July 8, Poloniex exchange said it had opened trading for two coins ETHS and ETHW, two tokens representing two Ethereum chains that were split after The Merge. 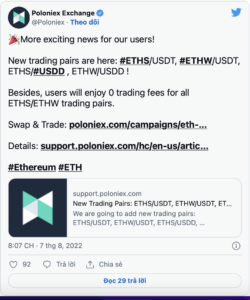 Justin Sun, owner of the Polinex exchange, has also publicly supported the proof-of-work community when promising to donate ETHW to the community and ecosystem developers.

“We are currently holding between 1 million ETH. If the Ethereum hard fork is successful, we will donate some ETHW to the ETHW community and ecosystem developers,” Justin said.
Source: MarginATM